A Brief History of the Keystone Hook & Ladder Co. No. 1

The original firehouse was apparently built on land owned by Jacob Bahney at Carpenter and Railroad Streets. Mr. Bahney donated the property to the Keystone by Deed on May 3rd, 1876 "for the storage of fire fighting equipment, same never to be sold to any private individual." This is recorded in Lebanon County Deed Book reference Z-713. The dimensions of the firehouse were 28' by 65' and had two bells in the bell tower. The smaller of these two bells is mounted on the corner where the original firehouse stood.

At the Keystone's meeting on January 6th, 1881, Mr. J.J. Moyer gave a lengthy report on the Volunteer Fireman's Convention held in Reading December 16th & 17th, 1880 which he attended as the Keystone's representative. At the convention meeting it was decided to form a permanent organization to represent the State's various fire companies. This organization became The Fireman's Association of the State of Pennsylvania. The Keystone became a charter member by paying an assessment of $2.00 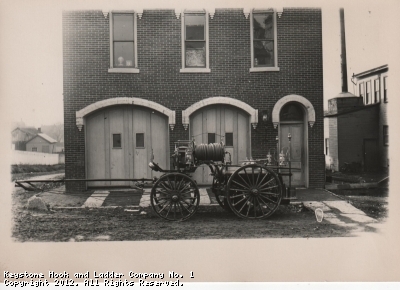 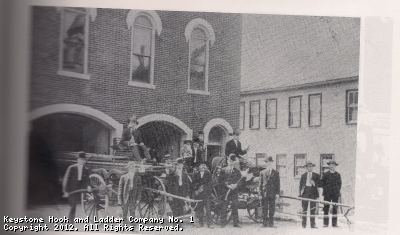 August 3rd, 1916 - Authorized the purchase of the company’s first motorized truck. A 1916 Triple Combination 500 GPM Seagrave Engine for $ 7,500.00. As a point of interest, the two axes from this truck were in continuous service until 1994.

June 30th, 1917 the Seagrave was housed with an ice cream festival at the hall in the evening, with all the Committee members serving the ice cream.

May 2nd, 1940 - Committee of 8 appointed to consider purchase of new truck

February 1st, 1949 - Committee of 28 appointed to solicit subscriptions for a new truck.

September 1st, 1954 - Purchased two radios for trucks and one handy-talkie.

July 3rd, 1958 - Purchased Rescue Truck at a cost of $2,940.00. Siren removed from Public building and installed on the Keystone Fire House Building.

February 1st, 1967 - The Keystone Company in conjunction with the Good Will Company the Ambulance Unit purchased equipment for a base station.

May 21st, 1971 - Joint Housing with Good Will Fire Company No. 1, to house new trucks for both companies.

February 3rd, 1972 - The Company voted to purchase the Post Office Building from the Tulpehocken Hall Association.

In recent years all trucks have been equipped with dual frequency radios, the pumper was equipped with 1800' of 3" hose and the rescue truck was equipped with a cutting torch. The Rescue Truck also carries a Hurst Rescue Tool purchased by the Myerstown First Aid Unit. Members are trained and qualified by the Board of Chiefs before they are authorized to use at an actual emergency. The Rescue Truck responds to all traffic accidents, in Myerstown Borough and Jackson Township that the Myerstown Ambulance responds too.

May 17th, 1975 - Ground was broken for construction of a new engine house with living quarters for active Fireman and banquet facilities. All work, with the exception of masonry work, has been done by members of Keystone. Chief Fredrick Shaak designed the building from scratch, and has been, by far, the major contributor of time and talent in the construction of the new building. The total cost, as of this time, is in excess of $150,000.00: with a mortgage debt of only $43,000.00. The trucks were housed in the new building on November20th, 1976. The old engine house was demolished in February of 1977 with a grant received through the County.

May 31st, 1975 - The Keystone held an Anniversary Parade in celebration of the Company's 100 years of continuous Community services.

August 23rd, 1975 - A banquet was held at the Treadway Inn to finish the 100th Anniversary Celebration.

By this the Company's Ladder Truck has proven beneficial several times, as it has served in both Lebanon City and Robesonia, besides serving the citizens of the Myerstown area.

June 16th& 17th, 1978 - Co-Hosted the 56th Annual Lebanon County Fireman's Convention. The new banquet hall was used for the 1st time for the Friday evening session. The ELCO School District used the banquet hall for classrooms during the 1978-1979 school terms, while the Elementary school was being renovated.

May 18th, 1980 - Dedication of the New Firehouse was held with State Fire Commissioner Charles Henry as the speaker.

August, 1983 - Put the Ladder Truck into service after having it refurbished for approximately $20,000.00.  The truck would be in service up until 2005 which was replaced by a 1992 Pierce rear mount Tower Ladder.

November 19th, 1983 - The 15th Anniversary of the Fungaspritzer's was held in the Banquet Hall.

February 7th, 1985 - The Company voted to take responsibility for one mile of 5" hose from the Jackson Township Supervisors. A committee was appointed to investigate what type vehicle the company should buy to carry the hose.

April 4th, 1985 - The Truck Committee reported buying a 70 Series, 1986 Chevy Chassis and a 1250 GPM Hale pump. They had also designed a body which Flintville Sheet Metal Works Built. Chief Shaak had designed a vertical hose reel for the 5" hose and was working on building this with company and other local talents. This concept was never seen before.

March 6th, 1986 - By this time company members had installed over 100 smoke detectors in Myerstown Borough and Jackson Township in cooperation with the Lebanon County Agency on Aging.  The Supply Engine was in partial service with 3000' of 5" hose. The total cost of this truck with reel and equipment, not including the hose, was approximately $65,000.00. It was paid for before a 2% state loan could be applied for. The reel when completed held 4,800' of 5" hose in 200' sections, continuously connected on six layers. One of the first calls to lay hose at an actual fire was on August 5th, 1986 at the Sunset Fire in North Lebanon Township.

November 13, 1991 – The Joint Radio Committee agreed to move the Fire/Ambulance Base Station into the radio room at the Keystone.  Improvements will be made in the radio room and used during extreme county-wide emergencies.  Base station will no longer be in 24 hr. service.

April 2, 1992 – Company voted to have LTI build the body for the new Mack Engine. Had been previously  decided to purchase a 1500 GPM Hale Pump, FMC High-Pressure Pump, 17 KW generator and a 1000 gallon tank. Engine will have a 5 man cab.

May 30, 1993 – Served the food for the 225th Anniversary Community Picnic and along with the Goodwill stood by for the evenings fireworks.

June 3, 1993 – It was reported that an idea came up at the Annual ELCO Chief’s meeting to hold a joint housing with the Neptune Fire Co. of Richland and the Schaefferstown Fire Co.  A Committee was appointed to pursue the idea.

September 2, 1993 – Reported that the first floor of the Old Post Office Building had been rented to the Lebanon Co. Commissioners for use as the District Justice’s Office

May 22, 1994 – Joint Housing Ceremony was held in the ELCO High School stadium followed by a very noisy parade. The parade left the High School stopping at Station 31 to house the engine. Next it stopped in Richland to house their new squad truck. Then on to Newmanstown to house Tanker 34. The day concluded with the housing of Schaefferstown’s rescue/engine.

March 2, 1995 – It was reported that the Myerstown Rotary Club had purchased for us a hand held Global Positioning System.  This will be carried on the rescue truck to be used for setting up landing zones for medical helicopters at scenes of emergencies.  Unit shall be available for all of the ELCO District.

March 6, 1997 – Decided to request to host the 78th Annual Lebanon Co. Firemen’s Convention in 2000 in conjunction with the Keystone’s 125th Anniversary.

September 2001 – shortly after the World Trade Center was struck in New York City on Sept 11th, the Lebanon Co. Salvation Army Canteen truck was dispatched to assist at the scene.  It was housed in Myerstown at the time and manned by mostly Keystone Members.  Several of our members volunteered to go.  During it’s deployment over 50 fifty emergency worker’s from Lebanon and Berks Counties volunteered to go as relief crews including most of the active Keystone members.

November 20, 2003 – After working 3 years investigating what other companies had, picking what we felt was needed to serve our needs and then designing the final body to be built, the company approved the purchase of a New Lexington body on an MR Mack chassis.  Cost based on their bid was $274,447.

January 15, 2005 – 1968 Aerial Truck taken out of service due to mechanical failure returning from a barn fire. Timing was unfortunate due to having the new Rescue on order and having to the balance of it’s cost.

February 3, 2005 – A Committee was appointed to look for a used replacement aerial.

March 3, 2005 – The members approved having the Aerial Truck Committee negotiate with the Elkins Park Fire Co. to purchase their 1992 Pierce 100 ft. Ladder Tower which they were asking $325,000.

April 6, 2005 – After negotiating with Elkins Park, a sales agreement was signed to purchase the truck for $257,500. The Jackson Township Supervisors loaned us $140,000 for the purchase. The loan is to be paid back in 4 years.

May 3, 2005 – The 1958 Rescue’s owner brought it to the Keystone for picture taking with it’s two subsequent replacements.

May 7, 2005 – The new Rescue was put into service.  While transferring the equipment from the old rescue, a call came in for an accident at Locust and Washington.  Both rescues responded.

May 10, 2005 – Although not in service for emergencies yet, the Truck handles it’s first detail. Helped form a Funeral Arch for Neptune Richland’s Chief Joel Morgan.

August 4, 2005 – Signed an agreement with the Myerstown Firemen’s Relief Assn. so they could pay the Keystone’s 10% share of $66,760 to purchase 16 new SCBA’s and 22 extra SCBA cylinders.  The balance was covered by a Federal Grant.

September 1, 2005 – Appointed a Capital Campaign Committee to investigate ways to raise funds to pay the balance of Truck and build reserves back up from the purchase of both the Truck and the Rescue.

October 17, 2005 – After months of extensive driver, operator and bucket operator training, the new (to us) Truck was placed in service.

September 7, 2006 – Reported that the Myerstown-ELCO Rotary Club was ready to start the Capital Campaign for the Keystone.  The campaign was called “FIREFIGHTING AND EMERGENCY SERVICES—A SHARED RESPONSIBILITY”.  Their goal is to raise $300,000.

February 1, 2007 – a committee was appointed to consider replacing the 1986 Supply Engine.

November 2, 2007 – A banquet was held at the Lantern Lodge to celebrate the completion of the Rotary Clubs successful capital campaign for the Keystone.  It was reported that pledges totaled $323,969 of which Keystone members pledged $11,900 after the Rotary Club challenged our members to pledge $10,000.  Over half of the total pledges were already paid.

July 3, 2008 – Company approved the appointment of the first Captain and Lieutenant.

October 1, 2009 – At the monthly meeting it was reported that the new Engine was being picked up the next day if it passed final inspection.  The company voted to name it Wagon 31.

November 4, 2010 – The Capital Campaign was declared over as all pledges were paid except by 2 businesses.  The total received over a four year period was $323,785.

February 2, 2012 – Reported that Rescue passed an inspection by the PA Department of Health for use as a Quick Response Service (QRS) unit.  This is another service provided to our citizens in cooperation with the Myerstown First Aid Unit.  The company appointed the first QRS Director and Asst. Director.

April 6, 2013 – A Keystone crew worked to install a concrete walkway around the War Memorial at the Myerstown VFW.  This memorial was recently moved from in front of the old Myerstown High School across from the Keystone.

April 6, 2013 – Truck 31 along with Ebenezer’s Truck 9 formed the arch for the dedication of the new burn building at the Lebanon Co. Fire School grounds.

June 4, 2015 – The company voted to apply to host the 2017 Lebanon Co. Firefighters Assn. Convention.  Received notification after the June 20, 2015 convention that the Keystone was approved to host the 95th Annual Convention in 2017

Keystone Hook and Ladder Company No. 1

Copyright © 2006-2021. YourFirstDue Inc. All Rights Reserved. Designated trademarks and brands are the property of their respective owners. Content on this web site is supplied by Keystone Hook and Ladder Company No. 1. YourFirstDue Inc. cannot be held responsible or liable for any content, text, pictures, or any other media found on this web site. Maintained by the members and staff of Keystone Hook and Ladder Company No. 1.
Management Login
Powered by